Funded by the Grainger Foundation and NASA, efforts are being made to help advance 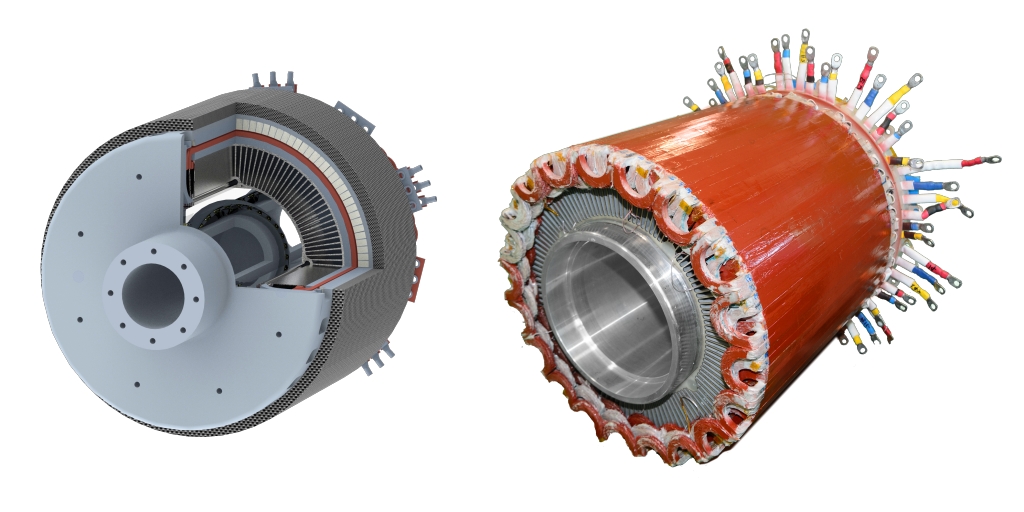 state-of-the-art induction motor (IM) and permanent magnet synchronous motor (PMSM) technology by reducing machine size and weight. High frequency, high pole count designs are being explored to reduce/eliminate the use of ferromagnetic iron in the magnetic circuit, and addressing corresponding electromagnetic, thermal, and mechanical implications. Detailed analysis is being performed using analytical and numerical models which capture the multi-physics trades associated with this approach. The opportunity for increased power density using the high frequency, high pole design has been demonstrated for PMSMs, and effects of similar approach to other machine types are currently being explored.

increase in electric machine power density by employing a novel superconducting machine architecture. Superconducting field coils open up a new design space for electrical machines with significantly higher magneto-motive force capability than conventional coils. This capability can be used to eliminate ferromagnetic material in the machine, and deal with a significantly higher magnetic reluctance (e.g. 10X). With the iron and its saturation limit removed, designs with much higher air-gap flux density (5-10X current levels) can be generated. We plan to reduce risks related to what many consider ‘exotic’ superconducting technology by using available,  mature superconductors, specifically Nb3Sn, and by leveraging cryogenic cooling solutions utilized in the health care industry. The proposed concept does introduce new challenges, though if successful it would enable electric propulsion in large aircraft, as well as large direct-drive wind turbines (> 10MW). 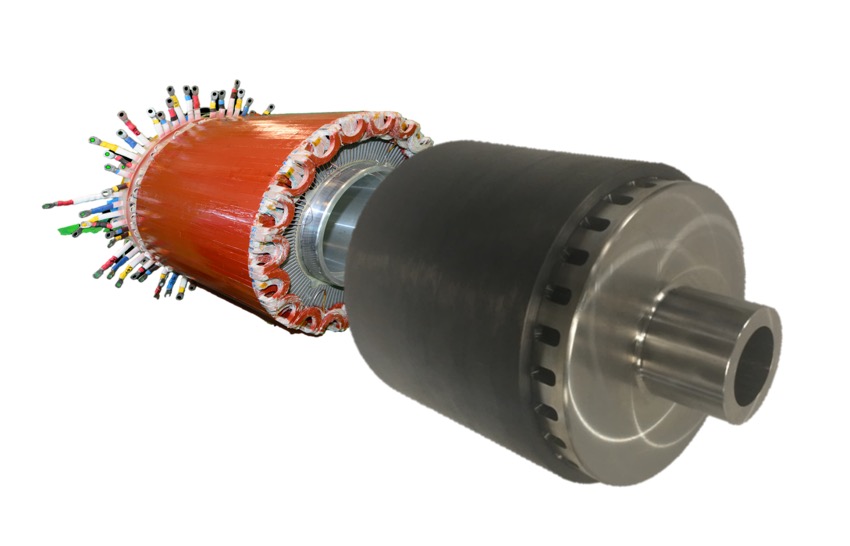 and numerical models and to improve the design. Different prototypes and testing fixtures are designed to serve various testing purposes. Students cad the 3D models and generate 2D drawings. With the help of ECE machine shop, majority of the prototypes are built in house. From an electrical perspective, tests including partial discharge test, megger test, hipot test, final resistance test and impulse test are performed to study the electrical characteristics. Pin test, spin test, dimension/tolerance check, and winding strength test are conducted to study rotordynamics and to check the mechanical integrity. Stator thermal resistance and cooling channel heat transfer validation are done to analyze the thermal performance. High-tip-speed windage loss test is conducted to validate the windage loss model.

During the operation of electric machines, there are a number of signals which can be measured to aid with condition monitoring and the control of the machine. However, the information within these signals is often hidden under noise and requires a bit of analysis to be useful. Here is where the emerging field of machine learning combines with our familiar field of machines and drives. Through its focus on motor prognosis and control, the Haran group works to combine a physical and electromagnetic understanding of electric machines with statistical analysis and machine learning to elucidate the hidden information. The group’s contribution takes shape in two projects. The first project works to autonomously quantify the quality and aging of winding insulation based on the online monitoring of a host of signals including partial discharge, resistance, capacitance and power factor tip up. The second, uses neural networks in conjunction with low cost hall effect sensors to replace resolvers in permanent magnet synchronous machines.

Cryogenic Hydrogen-Energy Electric Transport Aircraft (CHEETA) is a NASA funded concept proposed to utilize the high specific energy content of liquid hydrogen (LH2) through fuel cell energy conversion and an ultra-efficient distributed electric propulsion system. The concept uses (LH2) not only as the energy storage mechanism, but also as a cryogen to enable a highly efficient superconducting (SC) electric system. Letting gaseous hydrogen used in the fuel cells evaporate by heat losses in the SC motor and cables, the system provides free cryogenic cooling for SC electrical components.  If the required cryogenic power to remove generated heat losses in the electrical system is maintained below the available free cooling, an ultra-efficient electrical system could be obtained using this concept.

Our team is designing a SC machine (fully and partial) meant to propel a 6-hour regional electric aircraft. 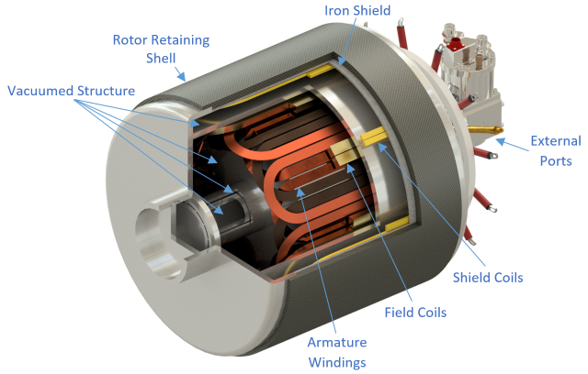 The machine which will result in high specific power (>25kw/kg) while maintaining ac losses to an allowable level (<4kW) for an ultra-efficient (>99.7%) electrical system. To increase the power density, an inside-out synchronous machine is proposed where traditional passive shielding is replaced with active SC shield coils. The additional coils are placed radially outward to contain the flux within the machine. When alternating fields and currents are introduced to SC materials, they generate losses in the form of heat, known as ac losses. Because motors for electric propulsion operate at high speeds and therefore experience high electrical frequencies, losses in the armature coils are significant and determine the feasibility of a design. A detail optimization study is carried out to understand the tradeoff between ac losses and weight.

Fully superconducting generators can enable very large (>10 MW) offshore wind turbines which have several economic benefits. However, there are still technical challenges that need to be studied, such as ac losses in SC filaments, as well as cost and weight benefits that need to be addressed to understand the feasibility of MW scale fully SC machines. In this NSF funded project, the team is exploring a novel high field, air-core fully superconducting machine topology which borrows and adapts a technique utilized in the MRI industry: that of an active magnetic shield comprised of SC coils. In addition to high specific power, these machines are also capable of efficiencies above 99%. This is enabled by the elimination of core losses and minimized copper losses, leading to substantially lower total losses even after considering the cryogenic power necessary to cool the SC coils.

In the fully SC machine, the armature coils will carry time-varying current while being exposed to a rotating magnetic field with some phase delay. These conditions will generate heat within the superconducting armature coils, a phenomenon known as “ac loss.” Managing the ac losses in the machine is a key challenge addressed in the project. The actively shielded concept is used to minimize the pole count without adding excessive weight. This enables a reduction in the electrical frequency for a practical design by a factor of 4 to 5 over the state-of-the-art, driving ac losses lower by an order of magnitude.

Generators used in wind turbine applications include a variety of topologies depending on the power level and the operating speed. Some of the large-scale wind turbine manufacturers show an increasing interest towards direct driven generators, which improves the reliability by eliminating the gear-box. Among other candidates, SPM generators show an advantage in terms of torque density and efficiency.

Recent research by power and energy group in Illinois has shown that power electronic cost of a generator can be significantly reduced by introducing multi-port architecture to the generator and by controlling only one port using active switches. However, implementation of this technology requires synchronous reactance of the generator to be smaller than conventional wind generators.

motor is being explored with the intention of creating a multi-disciplinary optimizer. A modified blade-element-momentum model accounting for tip effects and hub drag was used to simulate the propeller. First-pass sizing equations were used to estimate power and losses of a superconducting electric motor. Initial results show that there is an optimal sizing point for efficiency for the motor-propeller subsystem for a given propeller geometry. More refined models for the propeller and motor (superconducting and conventional) will be used in future work and in optimization.

The University has identified that Champaign’s displacement from a major metropolis,

such as Chicago, will have an increasingly negative impact on its ability to provide the best education and research possible. To overcome this economic bottleneck, an idea to develop an air taxi for rapid transport between Chicago and Champaign has been proposed. The air taxi will be an electric VTOL aircraft that will transition into horizontal flight for cruising. The vehicle will hold at least 10 passengers and the total mission time will target one hour.