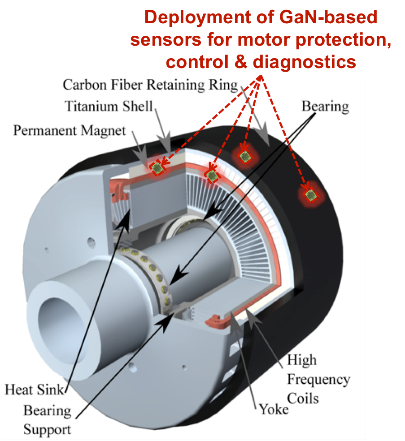 During the operation of electric machines, there are a number of signals which can be measured to aid with condition monitoring and the control of the machine. However, the information within these signals is often hidden under noise and requires a bit of analysis to be useful. Here is where the emerging field of machine learning combines with our familiar field of machines and drives. Through its focus on motor prognosis and control, the Haran group works to combine a physical and electromagnetic understanding of electric machines with statistical analysis and machine learning to elucidate the hidden information. The group’s contribution takes shape in two projects. The first project works to autonomously quantify the quality and aging of winding insulation based on the online monitoring of a host of signals including partial discharge, resistance, capacitance and power factor tip up. The second, uses neural networks in conjunction with low cost hall effect sensors to replace resolvers in permanent magnet synchronous machines.

The problem of motor insulation diagnostics is an important problem to solve before the coming of Fully Electric Aircraft. The low pressure, high humidity environment rapidly degrades winding insulation leading to earlier than expected failures. Current prognostic methods require either lengthy off-line testing, or are impeded by the variability in failure methods. The group’s thrust focuses on improving current methods through the simultaneous online measurement of an ensemble of signals including partial discharge, insulation resistance/capacitance and power factor tip up. The non-linear relationship between the signals, and their implications on insulation health are studied using machine learning models.  Machine learning models allow for the exploration of high dimensional relationships between signals, robustness to noise, and the ability to work with or without a-priori knowledge. At the current stage, the group is developing a test bed  to capture the above the mentioned signals, using the winding developed for the group’s 1 MW motor.

In the second project, the group focus on developing a low cost spatially constrained hall-effect based rotor position transducer[i]. In state-of-the-art motor systems, the ability to monitor the state of motors in a predictive fashion is limited by the complexity and dynamic nature of the system. Commercially available sensors cannot perform in such spatially constrained, and harsh environments due to signal-to-noise, manufacturing, and thermal limitations. In conjunction with Stanford University, the University of Arkansas and P.O.E.T.S, this project leverages miniature, temperature-tolerant sensors, neural networks, and the group’s high-speed MW scale motor to replace bulky and expensive resolvers for permanent magnet synchronous machines with small hall effect sensors placed around the outer rotor of the high power density 1 MW motor. The developed proof of concept achieves an average error of 1.1 degrees electrical angle, and in 90% of cases has an error less than 2.5 degrees. Continued efforts work to minimize the error, and leverage the hall effects sensors’ embedded temperature sensing ability to provide diagnostic information on the windings.